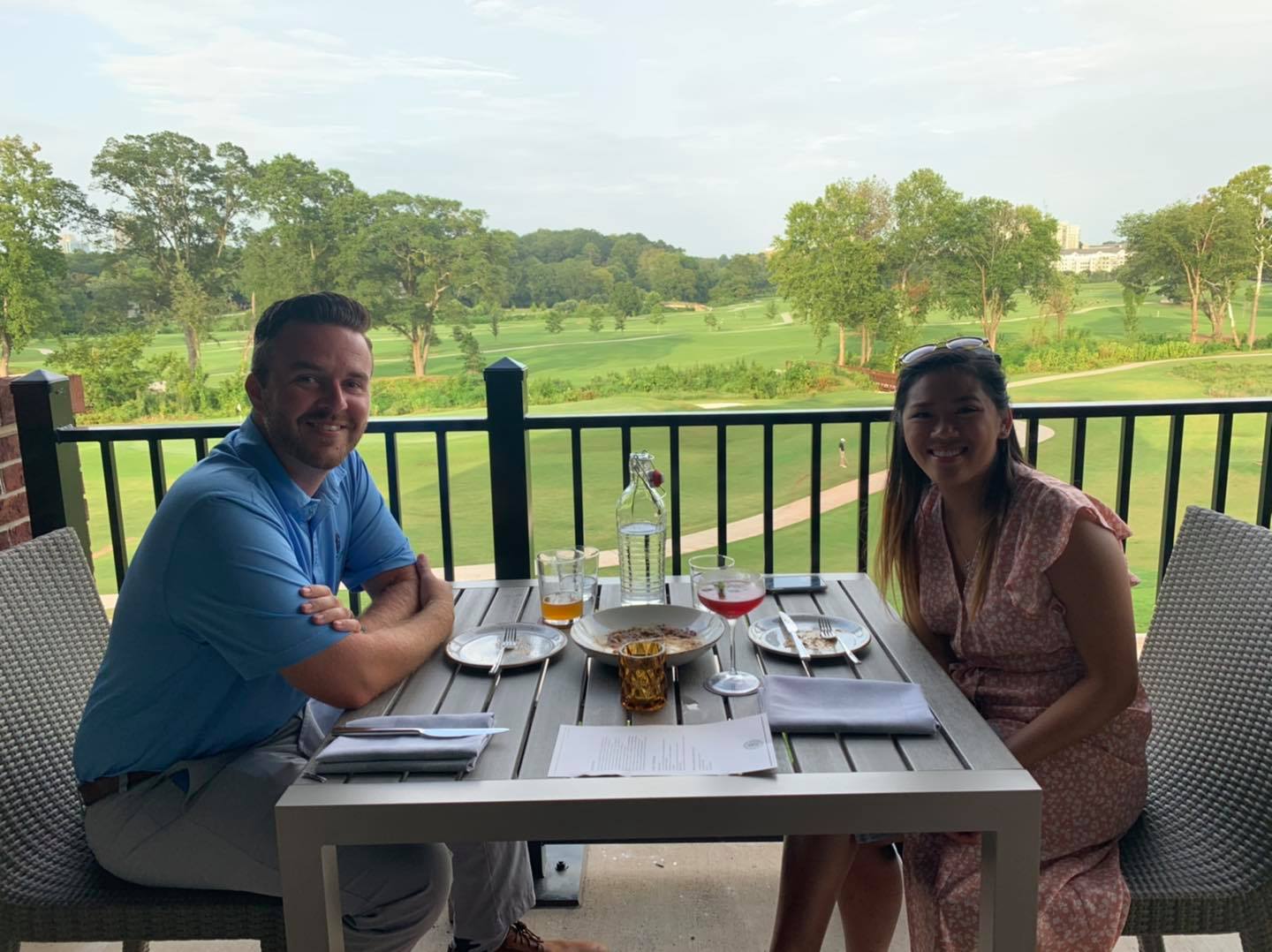 A fine mist of rain started to fall as I pulled into the parking lot off Northside Drive. It was my first time seeing the Murray Golf House in all its glory; when I was last in the area it was still under construction. It does not tower or loom and instead feels rather quaint. If I didn’t know better I might have imagined the building had been there for decades. But no, that is just how delicately balanced this club house was designed to be.

Off to one side, under an awning and through wooden double doors, is Boone’s. Named for Augusta businessman, philanthropist, and golfer Boone Knox, the New American restaurant features a refreshingly modern interior amidst the traditional elements of the Murray Golf House. Metal accents, beautifully upholstered seating, and a sleek semicircular bar give the space a light and comfortable air. Glossy historical photographs of Peachtree, Atlanta’s most famous street, are printed on metal sheets and displayed throughout the dining room. Just outside along the back of the building is an open air cocktail patio and covered dining area with incredible second story views of the golf course stretching out into the distance.

Now, first understand that I am not a golfer. Sure, I’ve played a few rounds at Top Golf and goodness knows I have made a valiant effort to stay under par on putt putt courses, but I have never once played the actual sport of golf. And yet here I found myself transfixed. The natural beauty of the land is like nothing I’ve seen before. Throughout my meal on the patio I was continually distracted by swooping birds, the occasional clack and whizz of a golf ball flying through the air, and the blissfully cool breeze tussling the branches of the massive trees that dot the serene landscape. The misty rain continued for the duration of my visit and gave the scene an otherworldly feel. It was hard to remember that I was still in the heart of the city, mere minutes from the centers of Buckhead, Midtown, and the Westside.

It was on the patio that I met my lunch partners; Bobby Jones Golf Course Association president Martin “Marty” Elgison and Austin Rocconi, Executive Chef. Together we sat and discussed the business, the building, the view, and of course the ever-present challenges faced by local businesses in the face of a global pandemic.

“When we designed this originally, this restaurant did not exist. It was going to be just a grab and go halfway house that you typically find at any golf course,” explained Elgison. Those plans changed rather far into the development of the Murray Golf House when Brian Conley, General Manager of Bobby Jones Links who had formerly been the Head Golf Professional and Director of Golf at Lake Lanier Islands Resort told them it was ‘crazy’ not to install a full restaurant.

The Murray Golf House was designed by master architect Jim Chapman and the interior design, all that sleek modern vibe with a hint of retro style, was actually thanks to a team of students from SCAD Atlanta. When the team was working on hammering out the aesthetics of the new club house they approached a design class at SCAD Atlanta led by interior designer Alejandra Martinez Dunphy of A-D Design Firm. The class split into teams and each presented a design which was then voted on by Elgison, Chapman, Whitney Krause, Bobby Jones Links, and a fundraising consultant firm. The winning team’s design was implemented, and Elgison brought on Dunphy to oversee the thousand smaller decisions for the space, covering everything from fabrics to light fixtures.