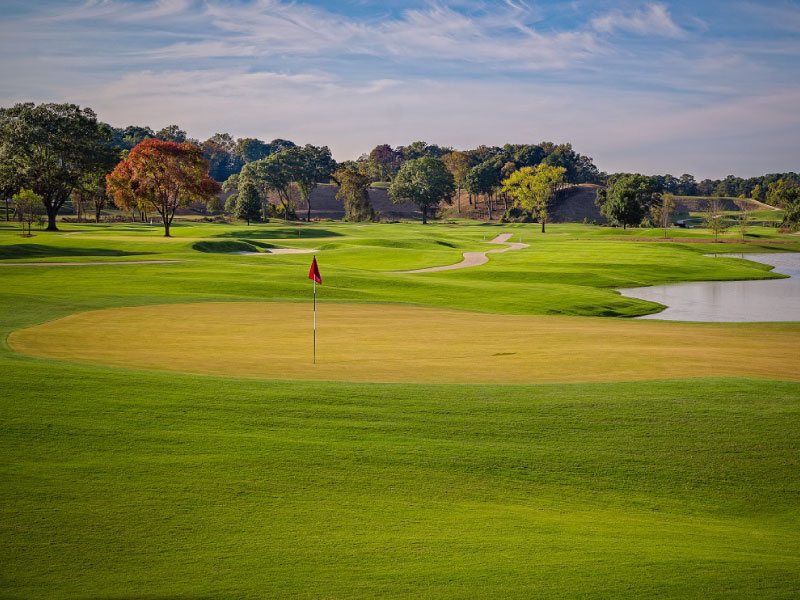 The greatest figure in the history of Georgia sport played his namesake golf course twice.

Both were exhibitions. In other words, they didn’t count for anything. The matches were sheerly for public spectacle.

The golfer, a man in need of no introduction, was Bobby Jones. The Atlantan rocketed to international fame in the 1920s and ’30s as the top golfer in the world. In 1930, he won the four major golf tournaments at the time — the amateur championships of the U.S. and Britain, as well as the U.S. Open and the British Open. He remains the only person to have done it.

Having accomplished everything there was to achieve in the sport, Jones retired at the peak of his career that same year. He was 28 years old.

New York City celebrated him with a ticker-tape parade down Broadway. He became a regular at historic St. Andrews in Scotland, the birthplace of golf. With his friend Clifford Roberts, he established Augusta National Golf Club in 1932 and the Masters Tournament beginning in 1934.

The Masters should have been played last weekend. It has been rescheduled for November.

Jones’ hometown celebrated his achievements with the naming of the city’s first 18-hole municipal golf course in his honor. The course, originally 6,455 yards, runs along Northside Drive from Woodward Way to the Bitsy Grant Tennis Center.

Jones didn’t have much to do with the original course. Wayne Stiles and John R. Van Kleek designed it.

Jones is rumored to have broken par that day and recorded an eagle by hitting his second shot in the cup on the par-4 fourth hole.

Jones again played the course after the clubhouse was completed in 1941. His score was not recorded, but he played that day, Nov. 22, with Dot Kirby, a Washington Seminary graduate who would win the U.S. Women’s Amateur in 1951; Louise Suggs, a founder of the LPGA; and Fred Owen, the course’s reigning club champion.

Those are the only two times the golfing great played his namesake course in his hometown. It is safe to say he was less than impressed by the original. A generous man, he didn’t support it by donating memorabilia or through patronage.

Folks who knew Jones saw the Buckhead course as subpar given its lineage. In 2017, with a great deal of controversy, it underwent a major renovation.

In 2018, with a nine-hole reversible layout by legendary golf course designer Bob Cupp, the course was reborn to a new generation. The layout has been a hit, and the driving range is always in use, even amid our current coronavirus conundrum.

Once the new clubhouse, called the Murray Golf House, is complete, it will become a destination for golfers and non-golfers alike. It will serve as the Georgia Golf Hall of Fame and the headquarters of the Georgia State Golf Association, The Georgia section of the PGA and U.S. Kids Golf. The 10th Hole Restaurant, also known as Boone’s Grille, will look out over the course.

Jones’ family has been involved and supportive of the new layout and facilities, and by the looks of it, it has been a smashing success.

Once the golf house is complete, I imagine it will complete a finally fitting tribute to the man who has meant so much to the world of golf, the state of Georgia and the city of Atlanta.